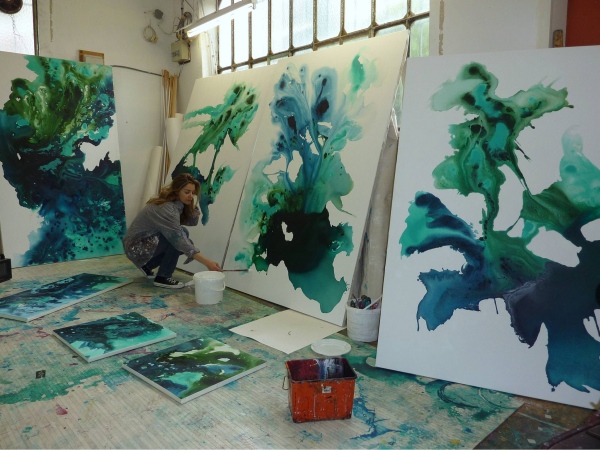 
Violaine Vieillefond was born near Paris in 1970 in an educated family whose intellectual interests were diversified. Her mother taught Comparative Literature and the History of British Art at the University, and her father was an engineer. She had been trained from her earlier years in different fields, scientific and artistic, and was soon made familiar with the Anglo-Saxon world and had a strong taste for travel.

From childhood onwards her mother made her follow courses in art studios which she pursued in adolescence and took her to many art exhibitions and museums. She lived close to the Marmottan Museum and thus often visited the Monet exhibition there, in particular The Nympheas. At 17 in California she discovered American Abstract Expressionism, large-size painting and colorfields.

She first graduated in science, economics and politics, while continuing to study art and art history, at the City of Paris Fine Art Studios with painter Martin Bissière and then under the tuition of Daniel Lacomme, former professor at the ENSBA (Fine Arts School of Paris).

Trained as an engineer and as well as visual artist, she has always been fascinated by  images and her experimentations carried out in the course of her studies in sciences : from then on, coloured fluids in movement, micro and macrocosmic worlds have nourished her own universe and influenced her approach as an artist.

Thanks to the technique she chooses as much as to the forms in her paintings in which hazard fills a large place, her work brings to light the specificity of water in movement and its aesthetic and emotional potentialities. We feel ourselves transported into a universe of forms being metamorphosed, organic and cartographic, and it leads us  to questioning life itself.

She currently lives and works in Paris and in the Alps .